MISSISSAUGA, ON, July 6, 2021 /CNW/ – Maple Leaf Foods, Inc., (TSX: MFI), a leading North American producer of high-quality, sustainable meat and plant-based proteins, today announced the release of its 2020 Sustainability Report, highlighting the company’s key initiatives, milestones and accomplishments in 2020 on its journey to become the most sustainable protein company on earth. 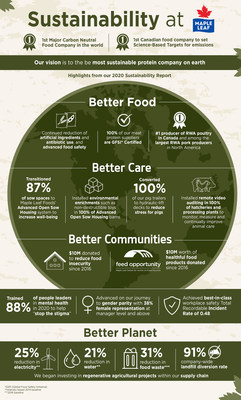 Throughout the challenges of 2020, Maple Leaf Foods remained committed to leading in sustainability, born out of a recognition of the enormous and essential role that the protein industry plays in nourishing billions of people, and the resources required to create nutrient-dense foods. While prioritizing the health and safety of its employees and the stability of its food supply, the company championed a more sustainable food system and accelerated support for the communities where it operates. The company made meaningful strides to enhance employee mental health support, develop its diversity and inclusion strategy, build its world-class animal care program and make progress towards its environmental targets. Maple Leaf Foods also celebrated its one-year anniversary as the world’s first major carbon neutral food company. The company was proud to be ranked second on the Coller-FAIRR Protein Producer Index among 60 of the world’s largest publicly traded protein producers and was named one of only three “low risk” investments on the index.

“Producing food took on an even deeper meaning as our disrupted nation needed nourishment. Never have I been more grateful that Maple Leaf Foods has a robust and mature sustainability program in place focused on delivering Better Food, Better Care, Better Communities and a Better Planet,” said Michael McCain, President and CEO. “Together, these sustainability commitments have been like a compass guiding us in our response to 2020’s remarkable events, keeping us focused on the vision and values that make us Maple Leaf Foods.”

Innovating plant-based protein alternatives is a focus for Maple Leaf Foods, and in 2020, the company repositioned its Lightlife® Foods brand as a clean, nourishing choice, and its Field Roast® Grain Meat Co. brand as a bold, flavour-forward, meat alternative for consumers looking to diversify their protein intake. Food safety and quality are also vital for Maple Leaf Foods. In 2020, the company exceeded its performance targets in both its Food Safety Incident Rate (by 41 per cent) and its Quality Incident Rate (by 63 per cent), reflecting the company’s commitment to delivering safe, high quality and great tasting food.

Maple Leaf Foods made significant progress towards in building its world-class animal care program. By the end of 2020, the company transitioned 87 per cent of its sow spaces to its Advanced Open Sow Housing system and installed environmental enrichments such as non-destructible toys in all Advanced Open Sow Housing sow, nursery, and growing pig barns. The company also added five climate-controlled poultry trailers to its Alberta fleet, and introduced SafeFlight real-time poultry digital trailer environmental monitoring across its Alberta operations and expanded implementation in its Ontario operations. To monitor and continuously improve care provided to animals, the company implemented Remote Video Auditing (RVA) in 100 per cent of its hatcheries and processing plants.

Food insecurity is a critical social issue that impacts health, academic and economic potential, and disproportionately affects racialized communities. In 2020, Maple Leaf Foods conducted the #ApartTogether campaign, generating almost $600K in donations in support of the Maple Leaf Centre for Action on Food Security, donated more than $2M to support emergency food access and contributed over $2.5M of healthful products to organizations who support those in need, a 67 per cent increase from 2019.

Maple Leaf Foods is committed to creating a culture and work environment that keeps people safe, rewards excellence and embraces an inclusive, diverse workplace. Worker safety is a top priority and in 2020 the company achieved a world-class Total Recordable Incidence Rate of 0.48 and Days Away, Restricted or Transferred Rate of 0.24. Thirty-two Maple Leaf Foods sites had zero lost time injuries and 23 of those sites were proud members of the company’s Zero Hero Safety Club. The company announced its Diversity and Inclusion Blueprint in 2020, outlining a comprehensive approach to addressing systemic and cultural barriers and providing an environment with equal opportunity for all to thrive. In 2020, 38 per cent of managers and 32 percent of directors were women. Because the company views the mental health of team members as equally important as physical wellbeing, the company delivered mental health training to 88 percent of all people leaders.

On November 7, 2020, Maple Leaf Foods marked one year as the world’s first major carbon neutral food company and the first food company in Canada to set Science-Based Targets. By the end of 2020, the company had reduced the intensity of its environmental footprint by: 25.9 per cent for electricity, 19.5 per cent for natural gas, 21.6 per cent for water (2014 baseline); 12.1 per cent for solid waste (2015 baseline) and 30.9 per cent for food loss waste (2016 baseline). It also diverted 91.6 per cent of waste that would ordinarily go to landfills.

Demonstrating that sustainability and a thriving business are not mutually exclusive goals, Maple Leaf Foods became part of the first Sustainability-Linked Loan in Canada, a partnership with nine global banks where the company will benefit from lower interest rates upon achievement of certain sustainability targets and maintaining its carbon neutral status. The company also established an internal ‘price on carbon’ that provides input into all capital decisions and a carbon calculator tool to factor the carbon cost into all capital expenditure requests and return on net asset calculations. Further, the company finalized efforts to reduce plastic waste through its sustainable packaging strategy and launched its Prepped and Ready portfolio packaging with Halopack, an eco-friendly solution that uses a combination of 90% recycled paperboard and 83% less plastic*. Continuing its leadership in sustainability, Maple Leaf Foods became a founding signatory of the Canada Plastics Pact and partnered with other leading Canadian businesses to inspire corporate climate action.

*When compared to a traditional HIPS tray 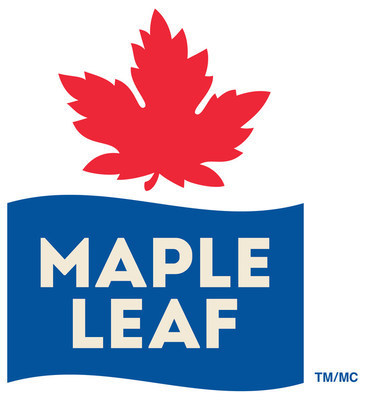