The new plant-based burger and ground will be available at top retailers in the U.S. and Canada, with more innovation hitting shelves this summer.

CHICAGO, IL (May 6, 2019) – Lightlife Foods (“Lightlife”), the #1 refrigerated alternative protein brand in U.S. retail, announced today that the Lightlife® Burger and Lightlife® Ground, its new plant-based meat products that deliver the sensory experience consumers crave from beef, will be available in the meat aisle at thousands of stores across North America, including Acme, Albertsons, Haggen, Jewel, Pavilions, Safeway, Vons, Wegmans, and hundreds of natural foods stores in the U.S. Other U.S. retailers will begin carrying the new Lightlife products throughout the summer, including Whole Foods in July. In Canada, these items will be on shelf in over 3,400 stores, including Federated Coop, Loblaws, Longo’s, Metro,  Save-On-Foods and Sobeys. 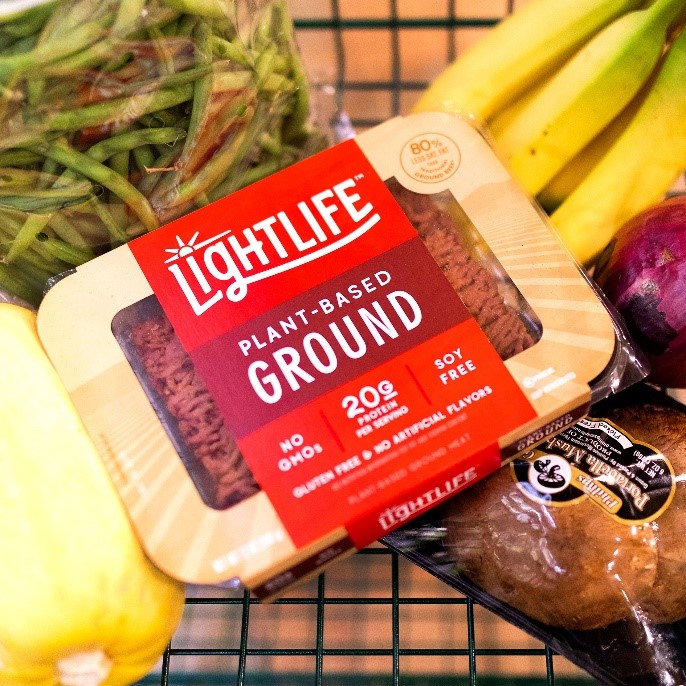 The new line offers the taste, texture, aroma and appearance of traditional meat, but is made of plants, giving you a familiar taste that fills people up without weighing people—or the planet—down. Free from GMOs, gluten, soy and artificial flavours, Lightlife’s new products appeal to consumers at all points on the plant-based journey, whether someone is simply seeking to reduce their meat consumption or is already a committed vegetarian or vegan.

In the U.S. and Canada, the Lightlife® Burger and Lightlife® Ground will start showing up on shelves in the meat aisle across thousands of conventional, natural, and independent retailers during the first week in May. In the natural channel, the new products will be available at Fresh Thyme, Moms, New Seasons, PCC, and Sprouts. Additional retailers in all channels will follow according to their planned store resets in the coming months.

The line introduces the Lightlife® brand to a new set of consumers and enables the brand to showcase a full brand and packaging redesign to mark its 40th anniversary. “This launch is very exciting time for the business and the brand,” says Dan Curtin, President of Greenleaf Foods, the parent company of Lightlife. “We’ve said it before: we didn’t join the plant-based category overnight—we’ve long been pioneering the industry. With this in mind, it’s wonderful to be able to see years of expertise, innovation and passion come to fruition when this groundbreaking product hits shelves this month.”

To learn more, visit www.lightlife.com/ and join the journey on social at @LightlifeFoods.

Founded in 1979, Lightlife Foods, Inc. is a plant-based foods pioneer with a passion for putting plants at the center of the plate. As a category leader in North America, Lightlife is committed to making plant-based eating more accessible and delicious with a portfolio of products that appeals to consumer at all points on the plant-based journey. Lightlife is owned by Greenleaf Foods, SPC, a food company dedicated to cultivating and advancing brands in the fast-growing plant-based food sector.