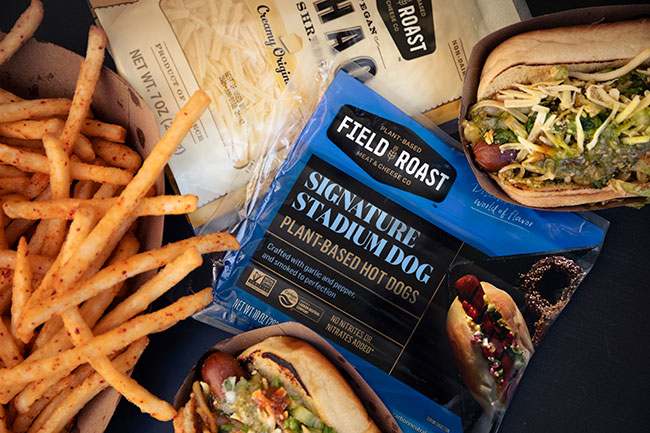 “‘The Home Run’ dog is insanely delicious, and the LA community won’t find anything else like it on any other food truck,” said Dan Curtin, President of Greenleaf Foods. “This co-creation is a testament to Field Roast’s and Roy’s commitment to pushing the limits of flavour and giving people indulgent, elevated flavours without sacrificing on chef-inspired quality.”

The Kogi Plant-Based Dog is the first of several initiatives planned between Field Roast and Chef Choi. In November 2020, Field Roast announced the multi-year partnership with Choi as part of a larger brand redesign and its Make Taste Happen campaign launch, which aims to inspire communities of culinary creators with bold flavours that help them craft, discover and share new taste experiences.

“I’ve always been driven by making different flavours and foods accessible to as many people as possible, so when I was frequently getting asked about plant-based alternatives for my truck’s menu offerings beyond just tofu, I knew it was time to bring something new to the table,” said Choi. “What Field Roast and I have accomplished together with the Kogi Plant-Based Dog is special to me because it takes an iconic menu item that’s representative of America, the ballpark, and the streets—then turns it up to ‘eleven’ for anyone who wants to try it. I’m really proud of how it came out.”

Field Roast and Kogi fans can find the new Kogi Plant-Based Dog the next time they visit the Kogi truck or can order it online. The Field Roast Signature Stadium Dog will also roll out nationally in retail this April.

Kogi started in 2008 when it hit the streets of LA with a humble little Korean short rib taco that met Twitter in the middle of the night in front of a nightclub in Hollywood. It then started to create crowds and cravings across the whole city transmitting a new form of dialogue and culture between food and technology. Over the years, the operation has grown to include several trucks, a bar, a taqueria and the rice bowl counter shop, Chego! The Kogi team is extremely dedicated to the communities and customers who have supported them over the years. They remain true to their roots while always pushing forward. As they say, Kogi Por Vida.

Roy Choi was born in Seoul, Korea and raised in Los Angeles. He is known as one of the founders of the modern food truck movement with Kogi BBQ, and for his TV series ‘Broken Bread’ (KCET/Tastemade) and ‘The Chef Show’ (Netflix). Roy’s cookbook/memoir L.A. Son was a NY Times Bestseller in 2013. In 2016 he was named TIME 100 Most Influential People in the World. And in 2017, his restaurant LocoL received the first ever LA Times Restaurant of the Year award. Roy resides in Los Angeles where he is a voice for street food culture past, present, and future, and the co-owner, co-founder, and chef of Kogi BBQ, Best Friend at Park MGM Las Vegas, Chego! and LocoL.