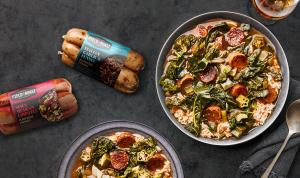 For the first time since its founding in 1997, the Seattle-born Field Roast is debuting a whole new look, including a redrawn logo and reimagined packaging. The new logo offers a modern spin on a traditional badge, designed to represent its trusted product and reputation for crafting high-quality plant-based meats and cheeses. The revamped packaging nods to the brand’s craftsman legacy with landscape imagery and flavour-forward product names.

To kick off the new era of the brand’s evolution, Field Roast has inked a multi-year partnership with culinary luminary and co-host of The Chef Show, Roy Choi. Choi and Field Roast will team up on the brand’s new Make Taste Happen campaign, which aims to inspire communities of culinary creators with bold flavours that help them craft, discover and share new taste experiences. To define its new identity, Field Roast surveyed more than 11,500 consumers to better understand their expectations of plant-based protein. The study found that Field Roast’s target consumer values food exploration, with nearly all stating that they like to be the first to discover something new (93%), try new things (100%), and that they enjoy cooking (93%).

“Field Roast has led the plant-based industry for more than 20 years, and this redesign represents the differentiated position we continue to pioneer in our category. We’re thrilled to bring consumers unexpected, indulgent flavours and to now inspire their culinary adventures with a trailblazing chef partner,” said Dan Curtin, president of Greenleaf Foods. “Field Roast is proud to welcome chef Choi to our team as a friend and collaborator. His leadership in the ever-evolving food scene and his unique talent for blending culture, community and culinary perfectly complements Field Roast. Together, we’ll help food-lovers explore more flavour adventures.”

In addition to teaming up to introduce Field Roast’s new look this year, Choi will help tell the Field Roast story through a national advertising campaign in 2021, which will include various marketing, public relations, and shopper marketing activities. Field Roast fans can also expect unique plant-based recipe ideation and inspiration from Choi.

“Through my journey to eat more plant-based foods, I found Field Roast and really connected with their food and their philosophies. I enjoy how their food tastes, how it cooks and its versatility. It’s rare when you can be a fan of a company and align with them professionally,” said Choi. “I am proud to partner with Field Roast. As plant-based pioneers, they’re committed to re-imagination and putting good things out into the world.  As a chef, it’s important for me to connect with people who genuinely care about what they do. As I’ve gotten to know the team at Field Roast better, I see what they are truly about—together, we’ll help people eat better and more sustainably.”

Field Roast believes the best dishes have yet to be discovered. Its portfolio of high-quality plant-based burgers, sausages, roasts, appetizers and entrees, in addition to its leading Chao Creamery dairy-free cheese products, are crafted for those who want to discover, indulge and share in bold taste experiences. Field Roast’s new packaging is already rolling onto shelves at over 17,000 retailers across the U.S., with more stores planned in the coming months.

Choi is known as one of the architects of the modern food truck movement and is co-host of the Netflix cooking series The Chef Show with Jon Favreau, as well as host and executive producer of the Emmy-winning social justice series Broken Bread. He is a graduate of the Culinary Institute of America. In 2010, Food and Wine magazine named him Best New Chef. His cookbook/memoir L.A. Son was a NY Times Bestseller in 2013. In 2016, he was named TIME 100 Most Influential People in the World. And in 2017, LocoL in Watts, received the first ever LA Times Restaurant of the Year award. Roy resides in Los Angeles where he is a voice and advocate for street food culture past, present, and future, and the co-owner, co-founder, and chef of Kogi BBQ, Chego!, Best Friend at Park MGM Las Vegas, and LocoL.