MISSISSAUGA, ON, March 16, 2022 /CNW/ – Maple Leaf Foods Inc. (TSX: MFI) today was ranked among a list of committed and impactful global leaders in animal welfare by the Business Benchmark on Farm Animal Welfare (BBFAW), the leading global measure of policy commitment, performance, and disclosure on animal welfare in food companies. 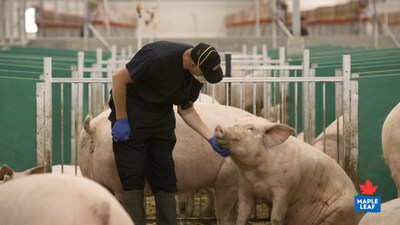 Following its review of 150 companies in 25 countries, BBFAW ranked Maple Leaf Foods in Tier 2, a position occupied by just 12 companies. Only four companies are ranked in Tier 1. The high ranking recognizes Maple Leaf Foods’ industry-leading animal care programs and performance and makes the company one of only two North American protein companies in the top two tiers and the only Canadian-owned company to achieve this distinction.

“Maple Leaf Foods is values-driven and deeply committed to providing the highest level of welfare to animals in our care. Our customers expect it and our animals deserve it,” said Vice President of Animal Care, Kathleen Long, DVM. “We’re proud of our recent, full conversion of all our sow barns to our Advanced Open Sow Housing system that enables our sows to choose when they eat, socialize, play and rest. We appreciate our collaboration with the Business Benchmark on Farm Animal Welfare as we strive for ongoing, continuous improvement in our animal care programs.”

The company has a demonstrated record of innovation in animal care. In addition to Maple Leaf Foods’ recent completion of its conversion of its sow barns to open housing, the company has advanced other industry-leading, animal care initiatives including:

In addition, Maple Leaf Foods is committed to raising all of its animals in ways that ensure optimal health and minimize the need for antibiotics. The company is among North America’s largest producers of raised without antibiotics (RWA) pork and is Canada’s largest producer of RWA poultry.